There’s an inch of snow on the ground. The temperature is in the teens. The local schools (excepting our own Lyceum, of course) are cancelled for the day. I have plenty to do — yet all I want is to lay on the couch, light a fire, and read a book until I fall asleep.

Seems a perfect day for sending this post out into the world. (Because blogging is still productivity of a sort, right?)

Chicken broth is the cornerstone for a lot of my culinary efforts. This blog’s “Drafts” folder is crammed with food posts, but since most of them use a varying quantity of chicken broth, I feel obligated to:

Begin at the beginning… and go on till [I] come to the end: then stop. 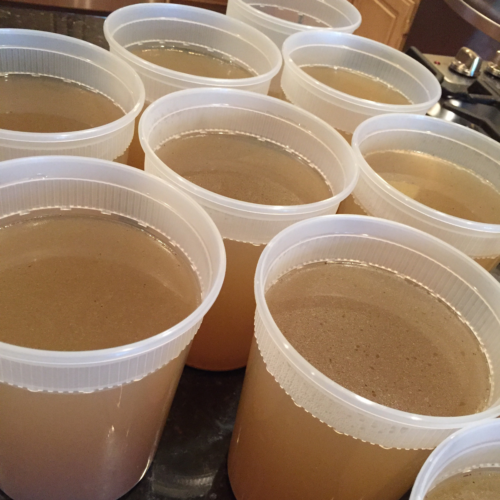 And chicken broth is the beginning.

There are a few pieces of equipment that I consider indispensable when making large quantities of chicken broth. (You can certainly make the broth without these items, but you may want to reduce the quantity. Or clear your calendar for a day or two. Free advice.)

The most important thing you need is a huge stock pot with a lid. Not the 8 qt. stock pot that came with your cookware set, mind. You need a hoss for this job. I use a 24 qt. aluminum pot from Sam’s Club.

Secondly, you need a large fat separator and a fine mesh strainer. Straining the fat and fine particles from your broth takes time and effort, but the results are worth it.

Lastly, you need some containers to store your broth. You have lots of options here, but make sure the chosen containers are freezer- and microwave-safe. These 32 oz. deli containers are perfect — if you have the storage space (or don’t mind splitting a box with friends and neighbors). These are also dishwasher safe, which makes them easy to reuse.

I heard an ugly rumor that some chefs actually discard a chicken after using it to make broth or stock, but I think that’s sacrilege. The byproduct of this excursion should be 8-10 cups of tasty chicken, just begging to be used for a dinner or two. (Recipes to follow.)

One way to make the eventual use of said chickens a bit easier is to cut up each bird before cooking. Cut-up chickens will cool quicker, too, making the process of de-boning the meat a faster endeavor.

You can buy chickens already cut up (usually called a “whole cut-up fryer”), but I prefer to buy the whole thing and DIY it. Firstly, because whole chickens are cheaper than pieces, and secondly, because fryers (a.k.a. “broilers”) are smaller, less meaty birds than roasters or stewing chickens.

I don’t own a cleaver, and the sound of cracking bones kinda gives me the willies, so I prefer to spatchcock my chickens.

Translation: Cut the backbone out. Use a good pair of poultry shears and cut down each side of the backbone until you can pop it out of the bird. Simple.

If you’d rather cut the chicken into quarters, that’s just peachy, too. Or just cook it whole. Whatever works.

There is at least one right way — and dozens of wrong ways — to cook a chicken. Most people don’t overthink it. But how you cook your chicken is important.

In my younger days, you might have found me with a pot of chicken on my stove, chittering away at a full, rolling boil for most of the day. Don’t repeat my mistakes. Learn from them instead.

Think back to when you were a kid. What happened when you climbed into a hot bath? Your whole body tensed up, didn’t it? More specifically, the sudden heat of the water made your muscles contract.

So it should come as no surprise that a raw chicken dropped into a pot of boiling water will do the same exact thing. Which is really bad — at least if you like your chicken moist, tender, and flavorful.

When you drop a cold chicken into a pot of boiling water, the temperature shock forces the muscles to contract. As the muscles contract, they squeeze out all the moisture — and much of the flavor — which is why boiled chicken tends to be dry, tough, and bland.

My friends, there is a better way.

Secondly, give it time. Bring the water and the chicken slowly up to temperature together. Don’t rush it. Definitely don’t boil the chicken. Start it on low and just nudge the heat up slowly until your chicken is at a gentle simmer.

Finally, don’t feel obligated to cook your bird for an eternity. Unlike a chuck roast loaded with tendons, a chicken does not need long cooking to make it tender. At a gentle simmer, bone-in chicken will be done within 20 to 25 minutes. You can cook it to the “fall apart” stage, if that’s what you prefer, but the meat is long since done, so you’re really just softening the inedible parts of the bird (joints, cartilage, etc.).

It should be noted that we’re making chicken broth here, not stock. Stock is a wholly different product, being more concentrated and gelatinous.

Yes, I suppose I could strip the meat from the chicken and return the carcass and skin to the pot of broth for a long boil, thereby producing stock rather than broth. But I’m so greedy for my broth horde, I’ve never yet been willing to surrender any of it for the making of stock. Maybe someday — when I’m all grown up. 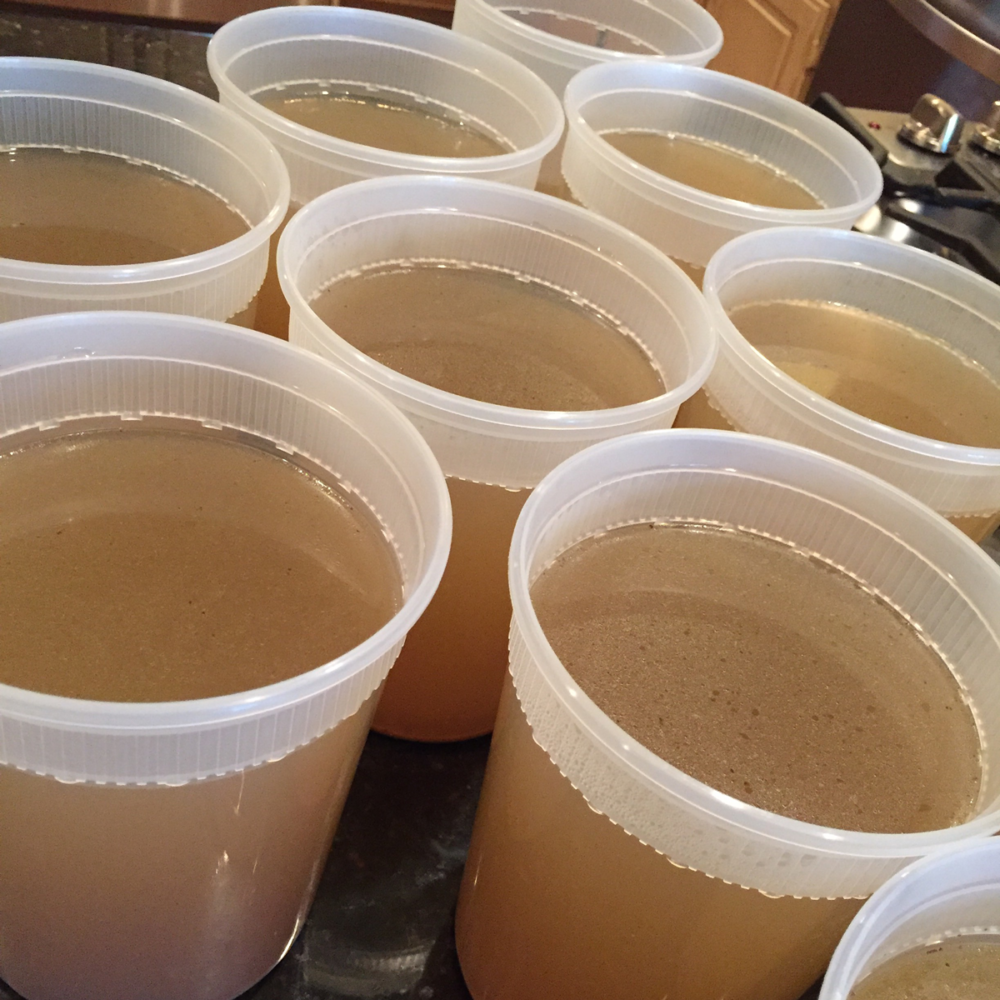