An illustrated guide to monogramming etiquette, choosing the right monogram style for your gift, using the proper initials in the correct order, and more. 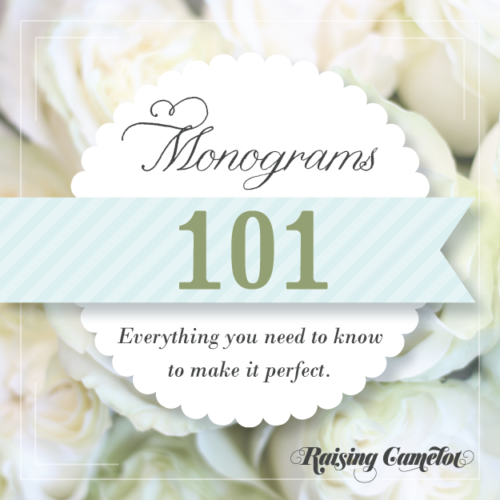 Monograms make nice things nicer. Most anyone can appreciate that little “extra something” a well-chosen personalization gives.

But if the etiquette of monograms and personalization seem like a mystery to you — or worse, a minefield of potential faux pas — don’t panic. Personalization, like hospitality, is meant to make the recipient feel appreciated and special; a well-intended effort on your part is what matters most.

Fair warning: although the information below is likely more than you’ll need, there may be a unique situation that isn’t addressed. If so, please visit Monograms 201 for information about personalization.

BEFORE GIVING A PERSONALIZED GIFT

WHICH INITIALS AND IN WHAT ORDER?

The actual arrangement of initials within a monogram is probably the biggest question people have regarding monograms. While good retailers usually offer some assistance in these matters, it’s wise to do your homework. To help you in this planning process, I’ve included the basic guidelines below. 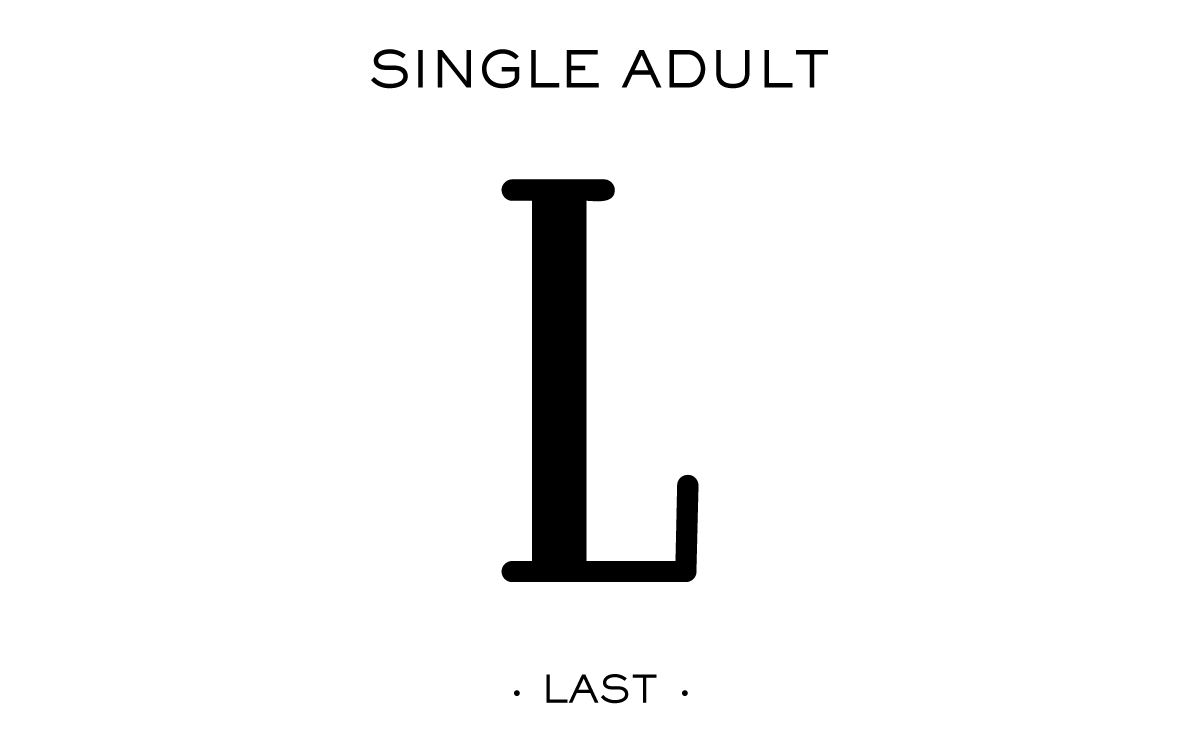 However, children usually identify with their first name much sooner than their last name, so an informal gift for a child or a teenager may use the initial of his/her first name or nickname.

The Two-Initial Monogram usually combines the first and last initials of one person, as seen below. 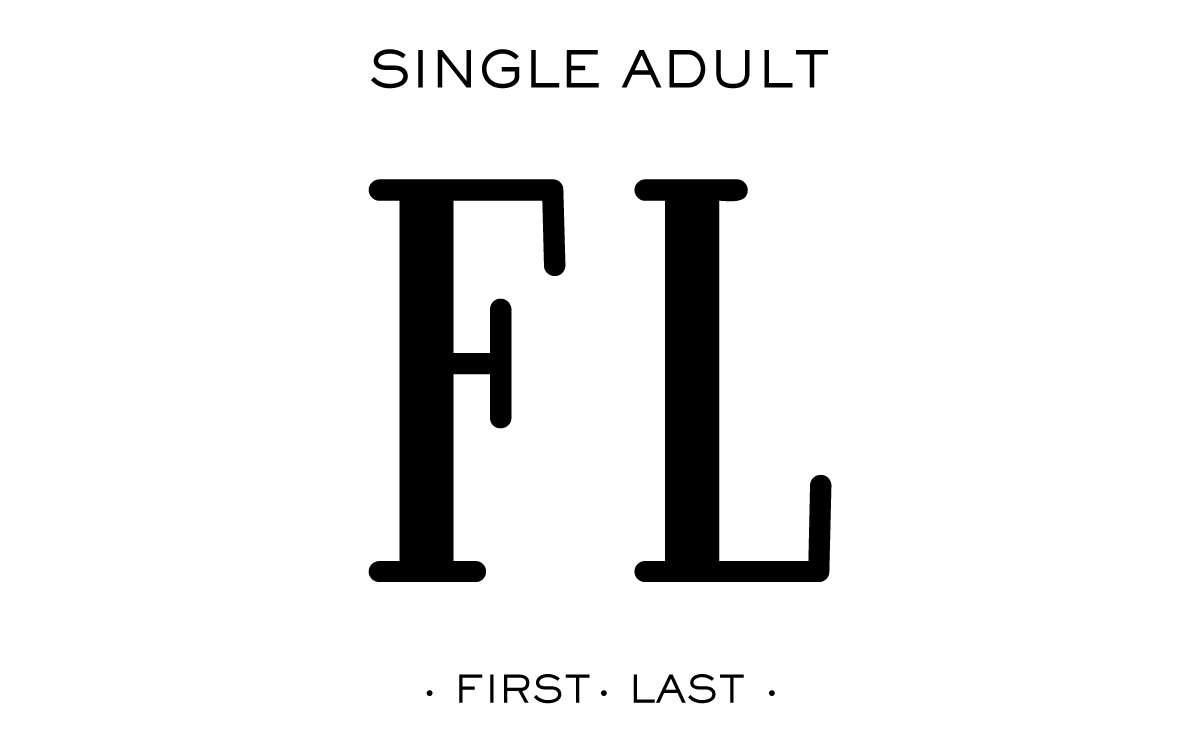 Once again, exceptions can be made. Some married couples enjoy using an informal monogram that combines the first initials of Bride and Groom (no last initial).

The Three-Letter Monogram is probably the most classic of traditional monograms. The ordering of the initials can be a puzzlement, though, so I’ve included some basic guidelines for the most common examples.

For a Single person, the etiquette of a monogram is the same regardless of gender or age. However, the order usually depends upon the format of the monogram itself. First, for a format that uses a larger size for the last name initial, the last initial should be positioned in the center. The monogram should appear as follows: 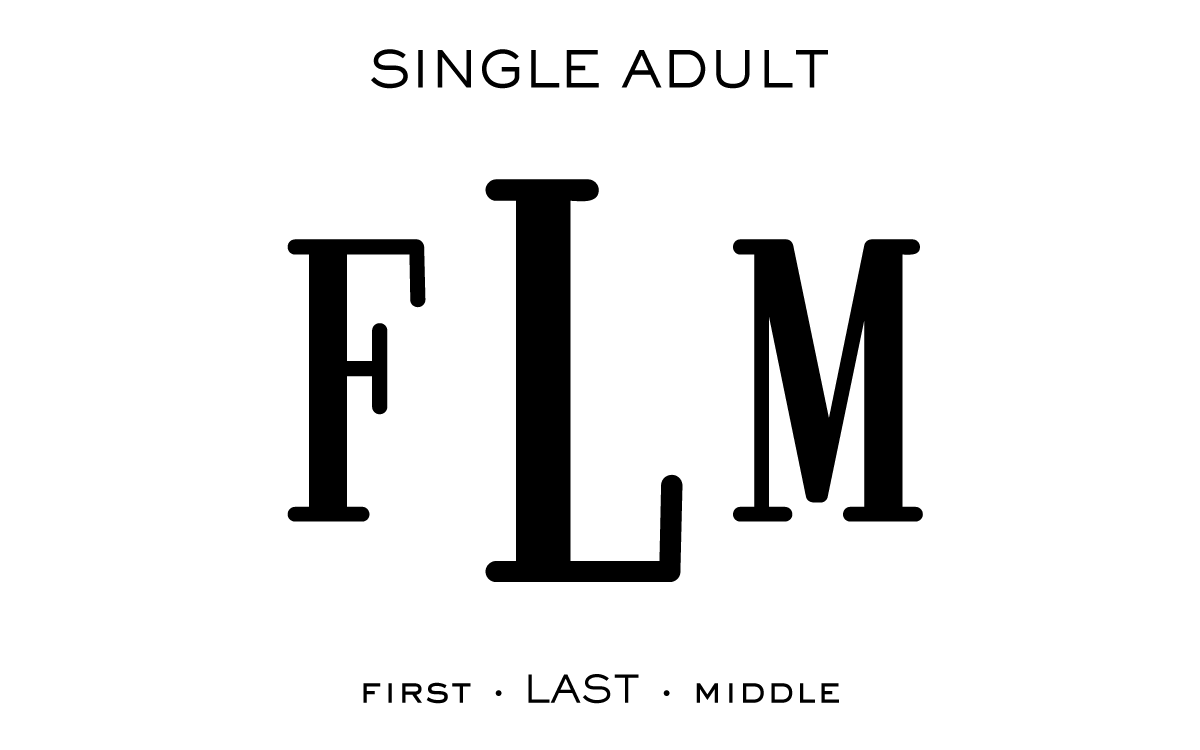 Alternatively, when the monogram format uses the same size letters for all initials, the last initial should be last. For example: 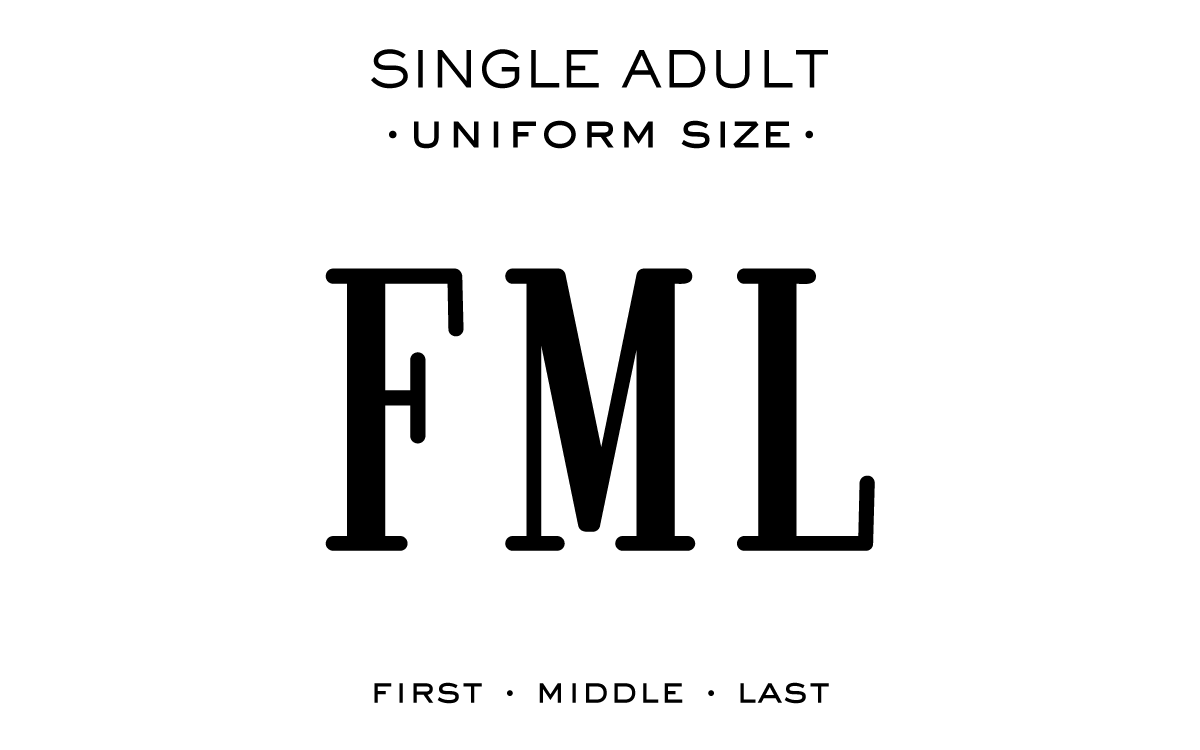 When a couple weds, there are several options for appropriate monograms. The most obvious choice is a joint monogram including the initials of both the Bride and the Groom.

The question of whose initial should go first in a joint monogram has been hotly-contested by a cadre of etiquette authorities. Traditionally, the Groom’s first initial would be first, followed by the joint last initial, then the Bride’s first initial. Due to the connotations of “ownership” implied by the traditional method, the philosophy of “Ladies first,” has superseded it among many retailers in recent years.

While there may never be a consensus between the factions, I find the “Bride first” method to be less formal, more modern and therefore more appropriate for today’s casual lifestyles. It’s what I prefer for my own joint monogram and, it’s what I recommended to my clients during my former life as a retailer. 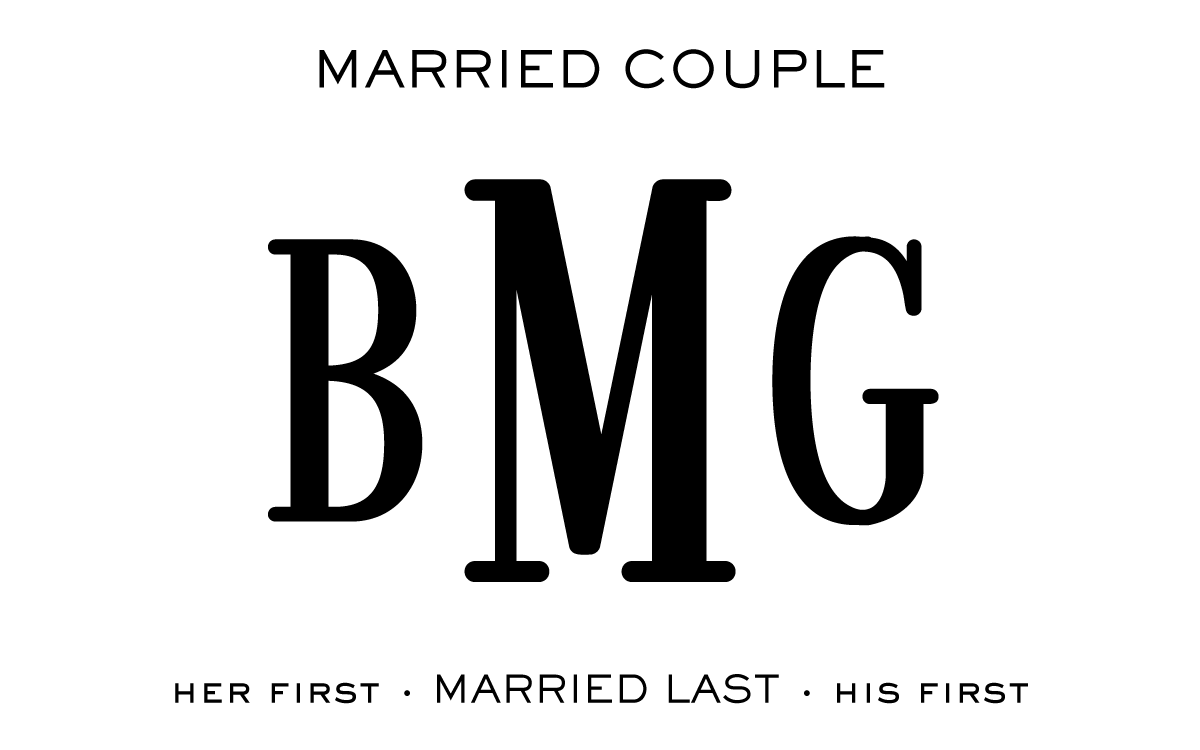 Renowned interior designer Phoebe Howard is known to use the Bride-only monogram exclusively. Whether or not this is the best option probably depends upon the couple, but as with a single person, there are several options for a married woman.

A married woman’s monogram depends not only on the adoption of her husband’s last name but the fate of her middle initial. Traditionally, many women chose to use their maiden name in place of their middle name after marriage. 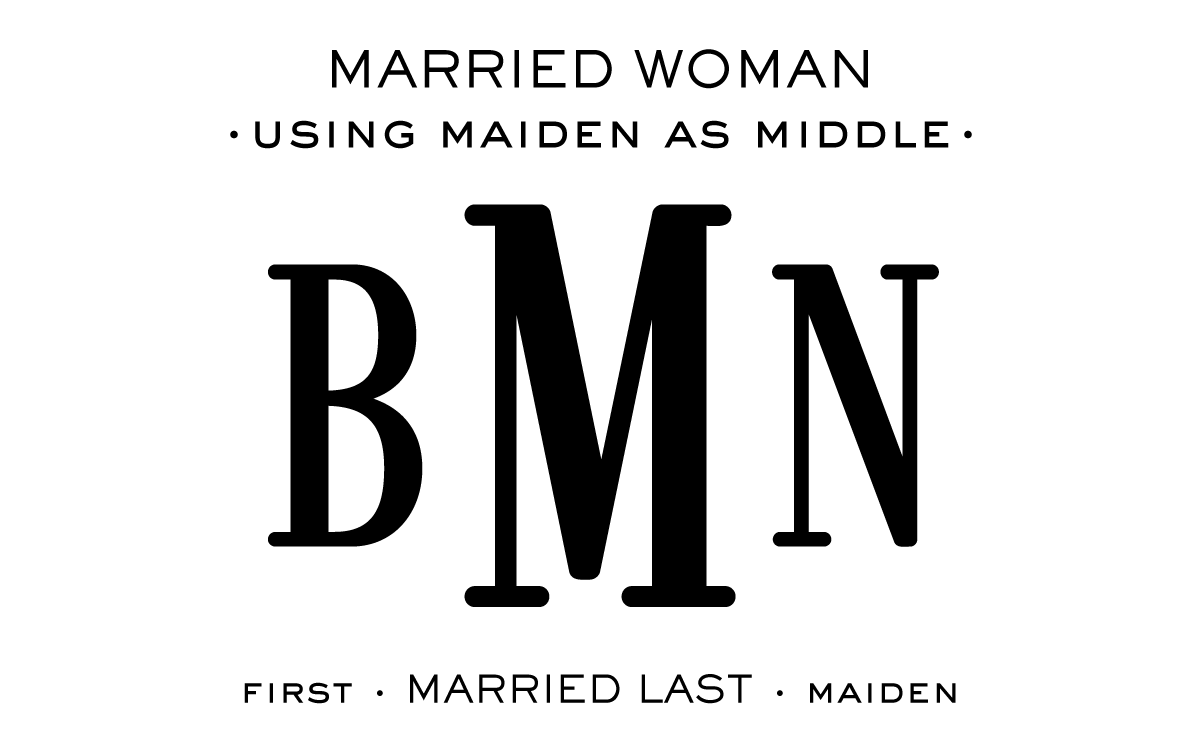 Other women may elect to keep their middle name intact. (In my case, a very long and complicated maiden name made it impractical to keep.) The monogram of a woman using the middle initial rather than the maiden initial would appear like this:

Unfortunately, certain combinations of initials are not well-suited to some monogram layouts. 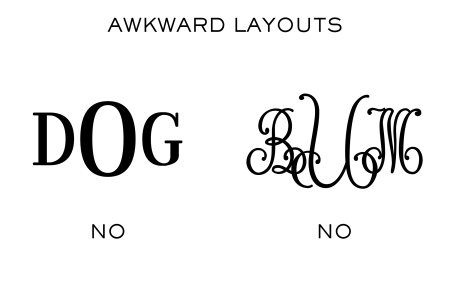 In such instances, a different monogram style, or a non-traditional arrangement of the initials might be a better choice.

Some monogramming companies will call these to your attention before the item is produced, but it’s wise to double check for yourself before placing an order. A little extra effort may prevent your sending the newly-minted Mr. & Mrs. Gordon Overton a “DOG” on their wedding day.

Another common area of confusion is the proper pluralization of last names.

Please visit my Monograms 201 page for more information on selecting a monogram in “tricky” situations, such as when using hyphenated names, prefixes, etc.

At this time, I am unable to answer specific inquiries about monograms. However, I encourage you to review this page (and its companion, Monograms 201) for answers to your personalization questions. The vast majority of difficulties can be solved with the information on one or the other of these pages. Failing that, a good retailer should be able to assist you in choosing the right monogram.

For any dilemma that is not addressed in these pages, I offer this advice: Keep it simple. More initials are not always better. Don’t be imprisoned by monogramming “rules” or conventions. If consideration for the recipient is your guide, you can’t go wrong.