It’s weird the things that can frighten me now that I’m an adult.

I’m not talking about real horrors that could rob me of my sheltered life: terminal illness, family tragedies, natural disasters, Chinese organ thieves. That stuff, I can handle.

I’m not even freaked by “usual” weird stuff.

Clowns, for example. Maybe it’s due to my own brush with “clown culture” — more about that another day, perhaps — but I actually like clowns.

We used to watch Bozo the Clown on WGN every morning. (The Grand Prize Game was like Who Wants to be a Millionaire? for kids. Greed and avarice served with a side of Archway Cookies.)

Ignoring the obvious racial connotations of the above doll for a moment, can you understand the creepy?

The church I grew up in had a couple of topsy turvy dolls in the nursery. As I recall, they were not racially, er, “mixed,” but brunette on one side and blond on the other. I also remember I liked playing with them. Or at least making sure that shameful blond side was decently hidden.  (Yes, I harbor latent anti-blond resentments. Sue me.)

Somehow, over the last thirty years, I’ve come to detest these innocent dollies. I’m not sure why. Maybe it’s the expanded understanding of human anatomy that comes with adulthood. Or one too many conjoined twins documentaries on TLC. Whatever. Topsy turvy dolls give me the willies.

Lest you misunderstand, I am not an advocate on anatomically-correct dolls for children. I think Barbie is just swell as she is — hinges, smooth mammaries and all.

But there is something about the-legs-become-the-arms-and-the-arms-become-the-legs-and-suddenly-there’s-another-head-down-there-where-no-head-should-ever-be-on-a-doll that just plain creeps me out.

I’m sure some people find it cute and endearing.

Something about it’s just indecent. And a little predatory. Like Aliens or something.

“I have triumphed over you. Now I will absorb you and assimilate your lifeforce…”

The only time this kind of scene is appropriate is childbirth. And I still don’t want to see it. That’s why I pay an obstetrician.

But this is a doll. A doll. For little girls.

Why is there another head? Why???? 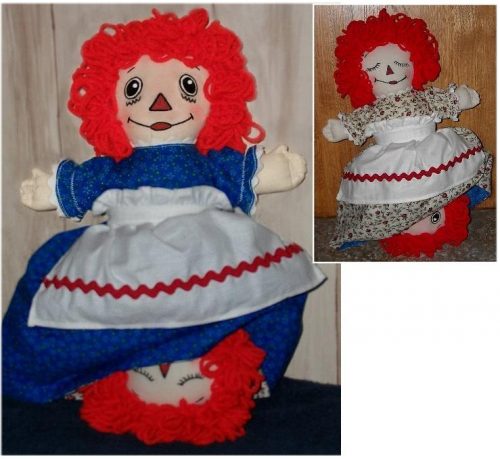 Andy? What are you doing down there?

I think I’m going to throw up.