I suppose since I usually flee “chick drama” with my heels on fire, it doesn’t make any darn bit of sense that I’m glued to the DVR every Monday night after the kids go to bed. But I can’t help myself.

Trash TV is an addiction. Guilty.

And as for The Real Housewives of New Jersey, well. Those Jersey girls throw seven different kinds of crazy all in one episode. Trying looking up “table flip” in Google images. 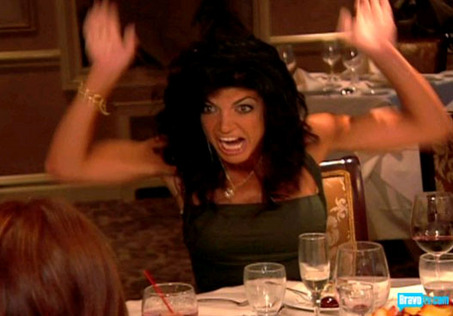 I grew up understanding that, at least in my corner of the world, table flipping and like behavior wasn’t something to be expected out of adults. Good “Southern” manners dictate that you don’t shriek expletives, rip out hair extensions, or chase people through country clubs. Provoking loud and violent confrontations is just tacky.

Granted, that’s not the whole story. After all, “If you can’t say anything nice, come sit by me.” But I think Southern women have elevated cattiness to a zen art with all the subtlety of Japanese flower arranging or Mossad assassination techniques.

Marjory:   Betsy Jo, aren’t you the sweetest thing! That casserole you brought over last night was such a surprise! Really now, was that your own recipe?

Marjory:  Mini marshmallows in Chicken Tetrazzini — how do you come up with such inspiration! You ought to send that recipe into Southern Living right away. You really should. I’ve never tasted anything like it. You are so thoughtful!

Betsy Jo walks away feeling gratified that her gesture was appreciated, but as she drafts her letter to Southern Living, it occurs to her Marjory never said what she liked about the casserole. In fact, for all the gushing, she never actually said she liked it at all. Betsy Jo may spend the next two weeks feebly combing her memory of the encounter, trying to remember exactly what Marjory said.

Meanwhile, Marjory, will go home congratulating herself on the dexterity of her faux compliment to a casserole she’s already flushed down the garbage disposal. She polishes her triumph with a few calculated phone calls to their mutual circle of friends, making sure to advise everyone that if their own mothers ever have surgery, for God’s sake, don’t tell Betsy Jo unless they enjoy marshmallow in their vermicelli and Mornay sauce. Poor dear, doesn’t she know what an awful cook she is? No wonder her husband is never home before midnight.

For better or worse, this is the world I know. Even insults are civil and usually quite subtle. The closest thing I’ve ever seen to a cat fight is the battle over the bride’s bouquet at a wedding.

Which is probably why I’m still astonished on the rare occasion I see an adult lose their temper in public. But I admit: when it happens from a safe distance, such as television, it’s fascinating to watch.

I wonder if any of these women ever wake up the morning after one of their grotesque and very public scenes, look in the mirror and think: “I made a complete fool of myself last night.”

Somehow I doubt it.

For the writer in me, I think RHNJ illustrates the importance of character to the stamina of an audience: once we truly engage with a character, or characters, we’ll follow them anywhere, through anything. The more compelling the character, the more crap the audience is willing to tolerate in order to “watch what happens.” We have to find out what comes next, even if we are secretly disgusted by the journey — or our husbands wonder if staying cooped up in the house has finally breached the threshold of our sanity.

Or maybe I just watch to reassure myself that “crazy” is a sliding scale and there’s lots of room between me and the table-flipping extreme.

« Poop, Croup & Spiders
Taking One for the Team »