Something about my front door seems to warrant decoration.

I didn’t have this problem in the old house. Or maybe I just never noticed it. My old door was completely blank 11 months a year, with just one lonely wreath thrown up for the Christmas season. And it never bothered me one bit.

But when I took the Christmas decorations down this year, the sight of my naked front door depressed me, so I made a Valentine’s wreath and that held me for several weeks. Now that St. Patrick’s Day is in the offing, I thought an appropriate decoration was in order. 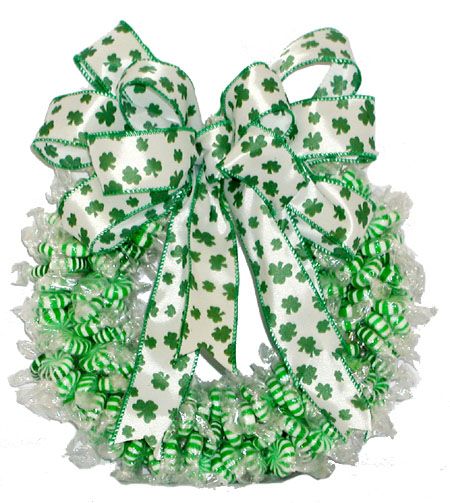 It seems that St. Patrick was the patron saint of tacky holiday decorations. I made a fabric wreath and was hoping to find some store-bought accoutrement, but…

If not for tinsel, glitter, green carnations or foil shamrocks, St. Pat’s Day decor does not exist. So I magicked up a burlap “shamrock” and tried to pretend that made this wreath festive enough.

And on the subject, I should note that shamrocks should feature three — not four — leaves. Because St. Patrick used the shamrock as an illustration when explaining the Trinity. Which embodies three persons, you know. So a shamrock with four leaves contradicts the entire significance of the illustration.

But I have a soft place in my heart for St. Patrick. So much so that I’d planned to write the screenplay for a St. Patrick biopic. I read a fantastic biography by Philip Freeman several years ago with just that goal in mind — and then stalled out only because the book would so good, my script would have been completely derivative and I’d have been sued within an inch of my life. So until I get a chance to contact the author and convince him to sell me adaptive rights for $1.00, that project’s on hold.

[Whatever will I do? Oh yeah. I guess I’ll have to go back to working on one of the other 6,465,229 partly-written screenplays in my head.]

Anyway, screenplay or no, the book is filled with details of Patrick’s amazing life that I would never have intuited from the drunkenness, carbo-load foods and tacky foil shamrocks that proliferate in his honor on this day each year. Maybe I’m the only person who didn’t know these bits of trivia, but I’ll plead my status as only distantly Irish and not even slightly Catholic as the cause of my ignorance.

For instance, (Caution: all trivia lifted from memory from Freeman’s book) Patrick of Ireland wasn’t from Ireland. He was — irony of ironies — British and from a wealthy family.

As a teenager, he as kidnapped by slave traders and taken to Ireland where he was sold into slavery.

He lived as a slave, working as a shepherd, for six years before having a vision in which God told him to escape. So he did.

Years later, after becoming a priest, he returned to Ireland to minister to the pagans.

Which leads to my interest in writing a screenplay about his life: What makes an escaped slave return to the land of his enslavement to help the people who’d robbed him of his freedom to begin with?

The kind of person I’d like to see a movie about, that’s who.

Okay, major rabbit trail. And you thought this post was going to be about my wreath didn’t you? Are you new here?

Knowing you is like going into the jungle. I never know what I’m going to find, and I’m real scared.

Yep, that’s me in a nutshell.

Because I think it’s kinda tacky.