Before your first child is born, lots of people (including those you don’t even know) tell you: “Parenting changes everything.” Cliched, yes, but very true. This inescapable fact seems to hit both Scott and I more significantly when we travel than at any other time. Case in point.

As part of our “almost” annual practice, we jaunted down to Texas to spend Independence Day with my grandparents and extended family. We have stayed in hotels with Griffin before so I was prepared for the usual precautions. Still, leave it to MY son to require precautions of the unusual sort.

We weren’t in our hotel room for five minutes before Griffin decided to explore the bathroom.

As soon as we realized that the lock was not easily “pickable,” I called the front desk, explaining the situation over the panicked cries of my son and asking them to please hurry.

Seven minutes ticked by while Scott tried to pick the lock and I tried to reassure the prisoner. Until I heard glass breaking in the bathroom. It took me about two seconds to decide against kicking down the door (since Griffin was probably in the way) before I was out in the hall, ready to use bodily harm to get a spare key from the desk clerk. Ten feet from the elevator, I hear Scott calling me back: he’d picked the lock and the door was open.

I went back to reassure Griffin while Scott cleaned up the broken glass. The Maintenance Man showed up 90 seconds later. Gee, thanks.

Crisis over. Are we ready for a nice, quiet weekend?

The very next night, we’re on our way to dinner (joined by the rest of the family). As we get off the elevator, Griffin decides to grab the elevator door as it slides open and gets his hand caught. Yes, that right, HE GETS HIS HAND CAUGHT IN THE ELEVATOR DOOR. I wish I were kidding.

Griffin freaks (I’m sure it hurt like hell) and starts to shriek. I panic and try to figure out which button to push to solve this crisis — I’m staring stupidly at the panel, looking for the “RELEASE CHILD’S HAND” button. Thank God, the family men retain their composure long enough to extract Griffin’s hand and I can resume my role of Chief Soother.

Griffin’s hand was pretty bruised but nothing was broken. Even so, he was not his usual bouncy self the rest of the night — and the rest of the trip, he treated the elevator with a marked suspicion.

Other than a deep scrape he got on his foot by trying to force the room door open over his toes, the rest of the trip was pretty “incident free.” But I can’t say I was really able to relax after all that.

Even so, we had a nice time (with very few pictures to prove it). We spent Sunday with Scott’s sister and went to the Dallas Puppet Theatre’s presentation of Snow White (very nice), followed by a trip to the Dallas Aquarium (a total DUD).

On Monday, we went to the Dallas Zoo, dodging pouring rain most of the day and having a nice time in spite of that. (As you can see from the pictures below, we got steadily wetter and more bedraggled as the day wore on, but no one minded.) Griffin came face-to-glass-to-face with a real gorilla — SCORE! He also refused his first pony ride but he did enjoy the carousel. 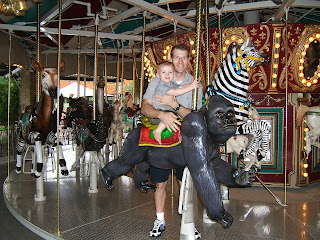 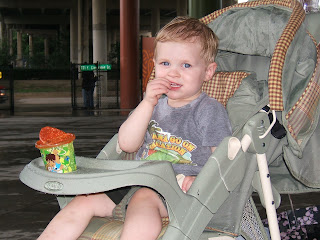 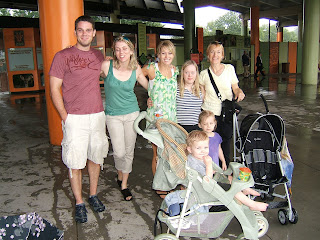 We spent Tuesday afternoon at IKEA (a first for all of us; if you’ve never been, go at least once) and Wednesday in or around Grandma’s pool.

The capper Wednesday night was a trip to Babe’s Chicken Dinner House in Sanger. Southern Living recommended Babe’s as having some of the best Fried Chicken in the South. Uh, yeah.
Our group tried (without meaning to) every entree on the menu: fried chicken, chicken strips, pot roast, smoked chicken, chicken fried steak and fried catfish. Every single one was a winner. The side dishes were sinfully good, plus buttery biscuits and incredible cherry cobbler. (I ordered the pecan pie but they were OUT! I was crushed.)
I’m not given to raving about restaurants, but I have to make an exception here. Babe’s has locations all over the Dallas area, so if you like comfort food, GO. In fact, go hungry, go early and stay late. We’re talking about having them cater July 4th next year . . .

Anyway, despite all the mishaps, it was a great trip. Now I need a vacation.

« "There She Is, Miss Publicity"
Universal Language for Child Molesters »