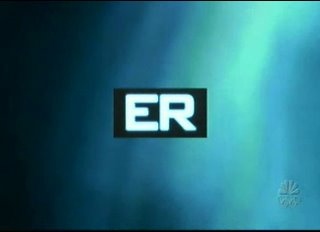 So I watched the premiere of ER on Thursday night.

Very premiere-esque with lots of dramatic goings on, but I must admit to being somewhat distracted by a very familiar storyline.

Does anyone else think that County General’s ER is the world most dangerous place to have a baby? In the perhaps seven years that I’ve watched this show (not to mention catching the whole series in reruns several times through), I can only count one time that a cast member or his/her spouse has gone through pregnancy and given birth “normally.”

As chronologically as I can manage — and with no research beyond my own recollection — here’s what we know:

Carol Hathaway gives birth to the first of her twins without complications but the second has a prolapsed cord and she must have a C-section, followed by the threat of a hysterectomy (which is averted in the end).

Peter Benton’s son is born prematurely and spends some time on ventilators. Though the baby is finally released from the hospital, Peter discovers he is deaf from a medication given shortly after birth.

Jing-Mei Chen gives birth without an epidural and agonizes over giving her son up for adoption before she finally goes through with it.

Elizabeth Corday and Mark Greene’s baby is endangered when Elizabeth goes into preterm labor after a fall. The eventual delivery happens uneventfully, though, I believe, without an epidural.

John Carter’s girlfriend miscarries their baby very late in pregnancy. The baby had a loop of umbilical cord wrapped around its neck.

Kerry Weaver had at least one miscarriage before passing on the childbearing duties to her girlfriend, Sandy. Sandy goes into labor prematurely and the baby is in the NICU for sometime. (I don’t really remember the details of this one very well . . .)

And finally, last week, Abby Lockhart and Luka Kovac’s baby comes at 27 weeks gestation after a C-section. Abby must have an emergency hysterectomy to save her life (nothing but a cheap rehash of the Carol Hathaway birth, if you ask me).

So does no one in the Chicagoland area have a peaceful, uneventful, normal pregnancy and childbirth experience? (You know, like mine?)

As far as I can tell, Susan Lewis is the first and only employee of County’s ER ever to have a textbook pregnancy and easy childbirth. So uneventful was the birth, in fact, that it never even occurred during an episode. The baby just appears as if by magic.

You’d think will all that great hospital-employee insurance and always available prenatal care, these folks would be coming out on top as far as babies go. Not so, it seems.

The moral of this story: if you want a happy, healthy baby and an easy delivery, you can start by quitting your job at County General Hospital. It’s against their policy.